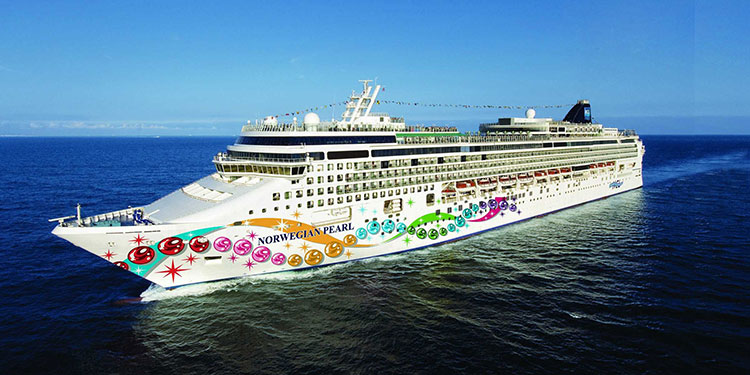 The dreamy Adriatic port of Trieste, the vine-clad hills of the Collio region, and the grandeur of the Friuli Dolomites are on this journey into an under-the-radar region of northeast Italy. Coastal trails lead us along the Gulf of Trieste, a splendid bay on the Adriatic, and in the sunny wine country of the Collio, we hike right from our castle-hotel into high vineyards. We’ll then hop over to historic Kobarid, Slovenia, to hike mountain trails past forts used by the Italians in World War I. Top-of-the-world trails bring us to the Jôf di Montasio Plateau, to crystalline waterfalls in Austria, and to a 16th century Italian pilgrimage site.

Located on Italy’s North Coast and virtually surrounded by water, Venice is singular among the world’s cities. Shakespeare must have agreed, for he selected Venice as the setting for his Othello and Merchant of Venice. Built over a sprawling archipelago, Venice encompasses 118 islands separated by more than 150 canals which are spanned by some 400 bridges. Adding a great historic past and incomparable art treasures, its renown as one of the world’s great cities is well justified.

Political refugees founded the first Venetian settlement in the 6th century. By the 13th century, the Republic of St. Mark dominated trade in the eastern Mediterranean and ruled the empire. The advance of the Turks in the east, the discovery of America and other trade routes in the west crippled the Venetian economy and decline set in. Despite this, Venice entered its artistic golden age; many magnificent structures were erected; artists such as Bellini, Titian and Tintoretto created world-famous masterpieces. Napoleon finally overthrew the republic in 1797. In 1866, Venice was annexed by the new nation-state of Italy.

There are countless treasures that await the hundreds of thousands of visitors descending on Venice each year. Most of the city has to be explored on foot, although a convenient water bus system, as well as water taxis, are plying the major canals. Cars can enter Venice as far as the Piazzale Roma, where they have to be left at designated parking areas. From here, a network of water buses traverses the whole city and is utilized heavily by residents and visitors alike. One of the best sightseeing routes is along the Grand Canal, where many splendid palaces line the famous waterway. One of the stations, St. Mark’s Square, offers access to some of Venice’s most famed attractions, the St. Mark’s Basilica and the Doge’s Palace, both facing the world-renowned square. From the Piazza San Marco, a maze of narrow streets leads off, lined with shops, cafés and restaurants. One popular pastime is sitting at an outdoor café fronting the square, sipping a drink and people-watching while letting this whole marvelous scenario unfold around you.

Glorious Venice is faced with the threat of gradual sinking. This has prompted numerous preservation efforts. In the meantime, visit this magnificent and romantic city. Treat yourself to a gondola ride, see the immense art treasures in museums, churches and palaces, have a sumptuous meal and shop to your heart’s content - all are available in this incomparable city.

Koper is a port city in Slovenia, on the country's Adriatic coastline. Its medieval old town centers around Titov Trg, a square with Venetian-influenced landmarks such as the Praetorian Palace and a Gothic-style loggia, while nearby Da Ponte Fountain is a replica of Venice's famed Rialto Bridge. Rebuilt many times, the circa-12th-century Cathedral of the Assumption features a tall campanile with sweeping bay views.

The City of Split marks 1700 years since the beginning of the construction of Diocletian's Palace. Split, a city where every epoche since antiquity has left its traces, was conceived within the walls of the palace which was built by the Roman Emperor Diocletian as his private residence. The well-preserved palace has been listed as UNESCO's register of the worlds cultural heritage. During these 1700 years plus, Split has played an important role in Croatian history. Today, Split is the center of cultural and scientific life, with many institutions, museums, gallerys and theatres. Split is the second biggest city of Croatia. Due to its central position on the Adriatic coast and its exceptional environment, Split soon developed into the leading and biggest city of South Croatia, its large port, commercial and industrial center and an important European touristic resort. The present city of Split is an organic fusion of its antique heritage and of modern architecture, set up in the beautiful Mediterranean environment and full of a sober and thoughtful atmosphere of a big city. As the scientific centre of the region, Split's scientific institutions have had remarkable results in many fields including the protection and study of cultural and natural heritage, oceanography, fishery, Adriatic agricultural cultures, etc. Split is also known for great accomplishments in sports, notably basketball, soccer, tennis, handball, rowing, sailing, and waterpolo. Split hosted the Mediterranean Sport Games and the European Athletic Championships. Split is connected by rail to the hinterland, by ferry boats to the Adriatic islands, Italy and Croatia, and to the rest of the world by its international airport

Kotor is a fortified town on Montenegro’s Adriatic coast, in a bay near the limestone cliffs of Mt. Lovćen. Characterized by winding streets and squares, its medieval old town has several Romanesque churches, including Kotor Cathedral. It's also home to the Maritime Museum, which explores local seafaring history. Sveti Đorđe, one of 2 tiny islands off the ancient town of Perast, features a centuries-old church.

Dubrovnik, a Croatian port, is considered the most beautiful city on the Dalmatian coast. Dubrovnik sits high on a cliff overlooking the sea, and is nestled in the shadow of Mount Srdj.

The walls of the city are one of its landmarks, and many structures from the medieval era remain standing, despite the many battles fought in Dubrovnik throughout history.

Though once ruled by Venetian doges, Turkish sultans and French invaders, today's Corfiot citizen is as Greek as they come.

Marvel at the 17th-century icons in St. George's Church, the medieval Palace of Phrourio or the 19th-century Achilleion Palace.

The greenest of the Greek Isles, Corfu also boasts thriving vineyards and olive orchards among its rugged mountains.

With its steep volcanic flanks looming straight up from the sea, and the tiny white village of Thira clinging high atop the cliffs, Santorini is perhaps the most breathtaking and legendary of all the Greek Isles.

To the south is Akrotiri, where recent Minoan excavations support the theories that Santorini might be the fabled lost continent of Atlantis.

The narrow passageways of Mykonos are a twisted maze of whitewashed houses, miniature churches, lazy windmills, and tiny cafes serving up Greek specialties.

Sample the freshest squid or lobster just snatched from the blue Aegean Sea, or shop for typical flokati rugs.

Piraeus is Athens' busy seaport, located eight miles from the city. Traveling time is anywhere from 30 to 45 minutes, depending greatly on traffic conditions.

The landmark hill of the Acropolis looms over Greece's busy metropolis. Athens' age-old symbol, the Acropolis was built by the Athenians during the 5th century B.C. in honor of the goddess Athena, patron of the city. The temple complex was regarded as a citadel of the gods, with the Parthenon standing out as the architecturally most sophisticated temple of that period. To this day, it causes a sense of wonder to even the most jaded visitor.

In 1834, Athens became the capital of modern Greece with a population of fewer than 10,000. Today, about a third of the country's more than four million people live in the city. The central area of modern Athens is relatively small, stretching from the Acropolis to Mount Lycabettus. Its layout is simple: three main streets - Stadiou, Venizelou and Akademias - link the two main squares, Syntagma and Omonia. Despite its traffic congestion and massive air pollution, the city is a must-see destination for anyone traveling to Greece. A stroll around the main squares or in areas off the beaten track can provide a feel of the unique character of Athens. Observe the activities at the central market or simply enjoy a cool beverage in one of Athens' many sidewalk cafés.

The real treasures of Athens are found in its classical art and architecture, which date to the very beginning of Western civilization. The highlight remains the Acropolis complex as it has been since the 5th century B.C. In addition, there is the National Archaeological Museum, which contains one of the most exciting collections of antiquities in the world. A visit to this bustling metropolis serves as a vivid reminder of how much the world has changed since the beginning of Western civilization. 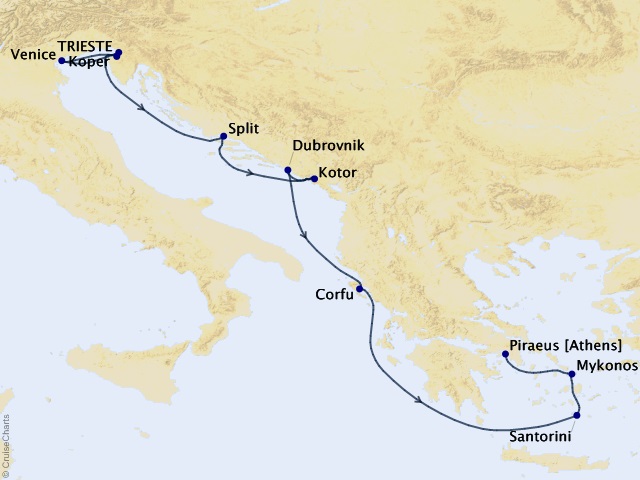 Disclaimer: All advertised events are exclusive to guests who book through Aquafest only. Aquafest Cruises are group events and not chartered vessels. All rates are cruise only and per person, based on double occupancy subject to availability at time of booking. Non-discountable fees and taxes, airfare, air taxes and transfers are additional. Events based on a minimum of 50 group passengers. Pricing and other information may change without notice. We reserve the right to correct errors. Information and pricing are subject to change without notice. All cancellations are subject to a $50 per booking cancellation fee from Aquafest in addition to any vendor cancellation penalties. Trip Cancellation Insurance is strongly recommended for all reservations. More information will be provided to you at the time of booking confirmation. Please contact us for a more detailed description of restrictions, cancellations, and penalties.