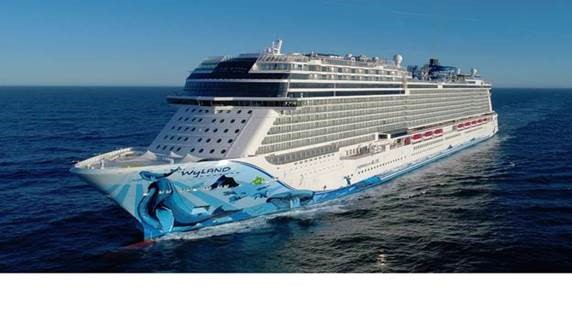 The Port of Los Angeles, also promoted as "America's Port", is a seaport managed by the Los Angeles Harbor Department, a unit of the City of Los Angeles. It occupies 7,500 acres (3,000 ha) of land and water with 43 miles (69 km) of waterfront and adjoins the separate Port of Long Beach. The port is located in San Pedro Bay in the San Pedro and Wilmington neighborhoods of Los Angeles, approximately 20 miles (32 km) south of downtown.

Cabo San Lucas, Baja’s southernmost city (pop. 30,000), is very tourist oriented. Locals—and those in the know—call it simply Cabo. Some of the region’s oldest and most beloved hotels are located there, tucked against sandstone cliffs, and the town is the center of the region’s ever improving shopping and dining scene.

And for those who want to know where the party is, this is the place: Cabo’s nightlife scene attracts a young crowd to the raucous bars and clubs lining the side streets (it reminds a lot of visitors of Key West, Florida). Drinking, dancing and mingling with potential dates are the big attraction.

Boulevard Marina, the main drag in Cabo San Lucas, is lined with restaurants, bars and shops. Though the boulevard runs along the edge of the bay, the view of the water is blocked by businesses and the massive Plaza las Glorias hotel.

The top natural attraction is El Arco, a spectacular sandstone arch at Land’s End, the tip of the peninsula. Sea lions and pelicans sun themselves there. Another beautiful sight is El Faro Viejo, the old lighthouse (ca. 1890), set amid sand dunes on the Pacific Ocean about 2 mi/3 km west of Cabo San Lucas. There are no paved roads to the lighthouse—visitors usually see it from an all-terrain vehicle or a boat.

The area’s quality sportfishing is due to the merging of the Sea of Cortez and the Pacific Ocean, which creates a fertile feeding ground for the game fish. You can try your luck for blue marlin, sailfish, mahimahi (known as dorado in Mexico), yellowtail, wahoo and many others. There are scores of charter boats that leave from the central fishing dock in Cabo San Lucas. If you catch a fish and you’d like to have it for dinner, there are several restaurants that will cook it for you. Otherwise, catch-and-release is becoming popular among anglers who wish to preserve the ocean’s bounty for another day.

Puerto Vallarta sits on Bahia de Banderas, the largest natural bay in Mexico, with 100 miles of coastline ringed by mountains. As for the beaches, they are among the most beautiful in the world. In Puerto Vallarta, you find long stretches of beach to the north of town, and a series of delightful coves to the south. The town itself is fairly large - and growing. But it has never lost its Mexican flavor. Cobbled streets run up and down among a warren of red tile roofed houses, creating a colonial charm that is a photographer's delight.

It wasn't until 1851 that the first settlement, called Las Penas, actually took root here. An agricultural town, it was renamed Puerto Vallarta in 1918 in honor of a former Jalisco governor, Ignacio L. Vallarta. The formidable Sierras kept the town isolated, and it wasn't until 1954 that regular air service began. The road from Tepic was finally paved in 1970, opening the way for tourism.

As the oft-told story goes, John Houston filmed "Night of the Iguana here in 1963

Mexico's largest Pacific ocean port, Mazatlan has been called the "Pearl of the Pacific"" for its splendid beaches and island-strewn harbor.

Situated about seventy miles south of Tijuana on the shore of Bahia Todos Santos along the Pacific Ocean, Ensenada is a small fishing and commercial port catering to weekend and summer travelers from southern California. La Bufadora on the southern end of the bay is a natural rock formation where the sea explodes into a natural geyser.
Beaches for swimming and surfing spots are found both north and south of Ensenada. Other local sports attractions include mountain climbing, beach-combing and hiking.

The Port of Los Angeles, also promoted as "America's Port", is a seaport managed by the Los Angeles Harbor Department, a unit of the City of Los Angeles. It occupies 7,500 acres (3,000 ha) of land and water with 43 miles (69 km) of waterfront and adjoins the separate Port of Long Beach. The port is located in San Pedro Bay in the San Pedro and Wilmington neighborhoods of Los Angeles, approximately 20 miles (32 km) south of downtown. 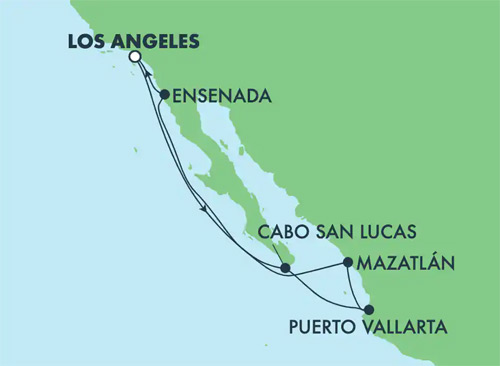 © Copyright 2023. All Rights Reserved.
AQUAFEST CRUISES — a division of CruiseCenter.